Today is my father’s 82nd birthday. I am the only daughter and the oldest of his five children. My parents have been married now 55 years. 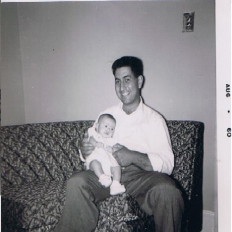 That’s me as a three month old with my Dad. When I was born he had hepatitis and couldn’t hold me for several months. This might have been one of the first times he got to hold me.

I wasn’t especially close to my Dad while I was growing up because he was self-employed and he worked a lot of hours. He owned and operated his own plumbing, heating and air conditioning company. The company employed a steady stream of plumbing and heating professionals and at one point Dad was the President of the Plumbing and Heating Contractors Association of Western New York. All this led to his being out of the home for long hours of every day including Saturday’s.

My parents had little money when they first got married and the family recounts stories of the pink truck they owned which only had one door that opened, the passenger’s door.

Somewhere around my freshman year in high school I began to realize how expensive it was to have five children and to be responsible for bringing in the money to take care of us all. My Dad sent me and two of my brothers to private school, which even back in 1970 cost a pretty penny. I began working at the age of 15 so that I could be less of a financial burden to the family. I wasn’t asked to do this, but I figured I could make some money and buy my own clothes and spend it on buying those things that I needed instead of asking my Dad to work harder to get it for me.

I do not ever remember wanting for anything while growing up. There was always food on the table, heat on in the winter and clothes on our backs. My parents did without a lot of things, like when they drove around in a car with holes in the floor board because they couldn’t afford to buy a new car, or when my Dad worked on Sundays when a client had a need.

My Dad wasn’t an especially demonstrative person toward me or my mother. He never held my mother’s hand when they walked anywhere, and they never had any open displays of affection. He was very much a conservative, Catholic Italian man.

Because my Dad owned his own business, he would employ family members who found themselves unemployed for whatever reason. He often had uncles, cousins, nephews and sons working for him when they needed to make ends meet. My Dad is thought of highly in my family.

All of us children were taught to get up early to go to work. If Dad had to get up we all had to get up, even if it was 6:00 a.m. If there was no school, my brothers would head off to work with my Dad where they would learn to dig trenches or fix toilets. They worked alongside somewhat salty men who all worked hard, but my dad taught my brothers how to work harder. They are all stronger for it today.

I know my dad is responsible for the incredibly strong work ethic I and my brothers have. We watched him work hard to provide us with a middle-class life style in a nice middle class neighborhood. At one time or another, Dad’s plumbing business employed every one of his children, including me.

Me with my parents on December 23, 2007, the day I married Mike. My Dad was my witness for the ceremony.

Over twenty years ago Dad got hurt while on the job and it ended his working life. My two older brothers jumped in to keep the business going to help Mom pay the bills and they did an admirable job. When it became clear that Dad could no longer work the way he had for all those years, he moved with my Mom to California. My brothers kept the business going for a short time. They had dreams of their own and places they wanted to go, so eventually the business was closed.

My parents now live in California and are quite happy there. They have one son and his family who live nearby. They also have lots of nieces, nephews and cousins around. I have one brother in Nevada and two who still reside in Buffalo. We will all be calling Dad to wish him Happy Birthday and another year of good health with many more to come. I thought this year I would also say, “Thanks for everything you did for me while I was growing up and I love you, Dad.”

I just don’t know where that is exactly

I was born in Buffalo, NY.  I escaped when I was 18.  That’s a joke based on years of dealing with harsh winter weather.  Buffalo is a beautiful city with a great history and warm people.  And the food!  I think what makes people laugh is that when they tell me that they are going to Buffalo we recount all the places they need to visit to eat some of the best food in the US.  Yes, they call that Buffalo Proud.

I moved from Buffalo, to Glendale, CA in 1978.  I stayed in CA until 2005.  I had homes and family in Nevada by then so I was going between the two states.  In 2005 I met my husband Mike (on a singles cruise to Alaska) and he was living in Washington State.  In December of 2005 I had sold both of my homes (one in Nevada and one in CA) to be with Mike full time in WA.  We made Olympia our home.  It was a beautiful little city and is actually the capital of WA.  I enjoyed my time in Olympia very much.  They have an awesome farmers market and they host the yearly northwest a cappella competition which Mike and I attended.

In 2007 Mike wanted a career change and we moved to Redmond, Oregon.  It was a nice little town with a very homey and comfortable environment.  We lasted until 2008 when Mike took a better job based in Salem, Oregon.  I really liked Salem.  It has a great university town feel and is again the capital city of the state.  We lived across from the weekly farmers market and the city was central to all things cultural.  What was hardest on me was the white supremacist feelings in the neighborhood and with my clearly ethnic looks I never felt safe unless Mike was around.  I had never lived in an area of the US with such a feeling and while I was angry as hell about this situation it also made me incredibly sad that in this day and age stupidity and bigotry ruled the day.

By 2010 I had had enough of cold weather and we moved to Las Vegas.  Now, you can move to Vegas on two conditions.  One, that you do not like to gamble and two that you like it warm.  Mike and I do not gamble.  In fact in the two years we lived in Vegas Mike never stepped into a casino unless he was going to a buffet to eat.  Not too many people can do that in Vegas.  The second factor, liking it warm, really takes a lot of learning.  It’s not always scorching hot in Vegas, they do get some cool evenings.  It’s just that having it warm outside all the time is exhausting, so you have to learn to adjust.  Mike did a great job of it.  The real problem with Vegas is that making friends is really hard.  The attitudes of people in Vegas are just not geared towards anyone trusting someone else.  They are so used to people scamming them or cheating them that they don’t trust.  When Mike decided in 2011 that he had enough of the working life and wanted to retire I wasn’t all that upset over it and we looked forward to the next adventure.

I guess you can say I’m lucky since I have always enjoyed every place I have lived.  I can find something good about every place.  I just have never felt that I belonged in any of these places long term and no place has ever felt like home to me.  I have always had a bit of the wanderlust that people talk about.  Most people in my family stopped asking me “how are you” ages ago, they learned to ask, “where are you now”.  As Mike and I keep moving from country to country we have met some great new friends and have lived in some wonderful countries, but home?  I’m not sure what that is exactly.  If home is a place where I feel comfortable and happy and have everything I need then I guess every place we’ve been is home to me.  I think I’m lucky in this regard.  It helps me to want to keep traveling and seeing new places.  Maybe some day I’ll be a homey and have roots and one place to call home.  Until then I’ll just make the world my home…