Or Where Did That Hang Glider Come From…

During our six week exploration of Chile we went as far south as Ushuaia (the last inhabited city on the continent) and as far north as Iquique.  Iquique is a city that lies past the Atacama Desert in the northern region of the country.  As we drove through the desert trying to make Iquique before nightfall I honestly thought we were driving through the Planet Hoth from the Star Wars trilogy, it was such a desolate and sand filled place and the workers working in the mines were dressed in outfits to deal with the blowing sand that look like they came right out of the movies.

As Mike got closer to the turn off for Iquique I saw a hang glider flying above us.   One had to wonder where he came from when all around us was nothing but sand.  As Mike crested the hill leading into Iquique suddenly the coast line of Chile was before us and we were looking at palm trees and beaches; a real oasis in the middle of the desert.

Iquique looks like the state of Hawaii.  There is a long beach that goes on forever.  There are palm trees and cool ocean breezes which are a constant temperature.  It truly was a paradise.

Iquique, as is most of Chile, is family centric. This beach front goes on for over a mile. 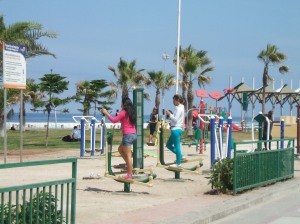 Exercise equipment is available on the beach for everyone to use 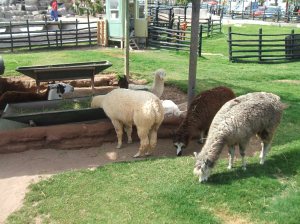 People are always asking Mike and me if we have a favorite city that we would return too to live.  We already know what the other is thinking.  For Mike it would be Pucon (located in southern Chile in the Lakes District), and for me it would be Iquique.  At least we picked the same country…