Having traveled to four continents and over 28 countries thus far I have to say I don’t think I have ever lived in a city with more murals than can be found here in Olympia, Washington.

A mural is defined as any piece of artwork painted or applied directly on a wall, ceiling or other large permanent surface. It is most common in a mural for the architectural elements of the given space to be harmoniously incorporated into the picture.

Olympia is home to the world’s largest solidarity mural. This 4000 square foot mural begins with a giant olive tree with branches and leaves. These leaves are called talking leaves with each one representing an organization from around the world which represents solidarity, activism or community service. The mural was erected in honor of Rachel Corrie who was born here in Olympia but killed in Gaza. The artists who participated in creating this mural were local, national and international artists and activists. 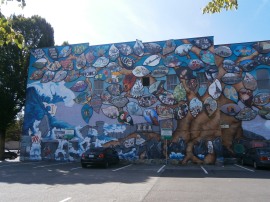 This mural is 4000 square feet. It is the largest solidarity mural in the world. © Photo by Florence Ricchiazzi Lince

It was created in memory of Rachel Corrie who was born in Olympia but died in Gaza. © Photo by Florence Ricchiazzi Lince

This website, for the Olympia Rafah Solidarity Mural Project, has a wonderful interactive aspect which tells you which organization painted and supported the mural ‘leaves’.  It will also allow you to see the leaves close-up.  Rachel Corrie was a young activist who was crushed to death by an Israeli bulldozer while defending the home of a Palestinian family in Gaza. The mural is located on the corner of State Street and Capital Way.

Not all murals are political in nature. This one is for a local Italian restaurant – called, you guessed it, Trinacria. © Photo by Florence Ricchiazzi Lince

Trinacria is a Sicilian restaurant located on Capital Way.  It is open only for dinner and doors open at 5:00pm. I can personally attest to the fact that the cannoli’s are made fresh when ordered and the owner, who is from Sicily, uses good rigotta cheese.

This mural is located near a local Thai restaurant. © Photo by Florence Ricchiazzi Lince

In almost every alley in between buildings you can find a mural.  They are literally everywhere in this city.  You just need to keep your eyes peeled.  This one is located near a local Thai restaurant.

Some murals are two murals in one. This building is so large they put first one mural here and then used the second half of the building for the other. © Photo by Florence Ricchiazzi Lince

One of the other famous murals in Olympia. This one is found on the side of The Old School Pizzeria. © Photo by Florence Ricchiazzi Lince

The mural depicting all of the Marvel Comic Book Hero’s was copied from a 300 piece puzzle entitled the Marvel Super Heroes Fantasy Jigsaw Puzzle.  Can you name all the super hero’s?

Some art is frustration art. It can be beautiful however. © Photo by Florence Ricchiazzi Lince

This mural is located on the same stone wall as the mural for Trinacria.

Participating in the painting of murals is a big deal here in Olympia.  This past August 24th was the 4th Annual Community Mural Painting Project.  Residents and painting enthusiasts meet and help to paint a new mural every year.  This year the mural was located at the Olympia Little Theater.  I will have to make it over to the site to take photos of the finished project and I’ll share them in an upcoming post.

I could not find a website to tell me how many murals there are in Olympia.  As I see and find more I will record them in snapshots and then share them from time to time.